Back to Teacher View
Student View

Enjoy this bonus article from our friends at Scholastic MATH magazine!

Early on November 8, 2018, a power line started a small fire in Northern California. Over the next two weeks, that fire blazed into what became known as the Camp Fire. It was the deadliest fire in the U.S. in 100 years. Strong winds spread the inferno across 240 square miles of dry ground. Eighty-five people died and about 19,000 structures burned, including most of the town of Paradise, California.

For millions of years, wildfires were mainly caused by nature: lightning strikes or volcanic eruptions. These wildfires helped clear away dead plants and trees, which restored nutrients to the soil and helped sunlight reach more plants. But humans have been building roads, houses, and more through forests and grasslands. This has increased the chances of accidents like the one that started the Camp Fire.

Another reason for more wildfires is rising temperatures. Scientists have found that global warming caused by human industry and agriculture feeds wildfires by drying out plant matter and increasing winds that spread the flames. “Anything you can do to prevent climate change helps,” says Benjamin Cook, a climate scientist.

Building too close to forests and grasslands also prevents natural fires that clear out dead wood and plants. This fuels dangerous wildfires, says Toddi Steelman. She’s a wildfire expert at Duke University. If our towns and suburbs didn’t spread out, “we could better coexist with fire,”
she says.

Start A Free Trial
Back to top 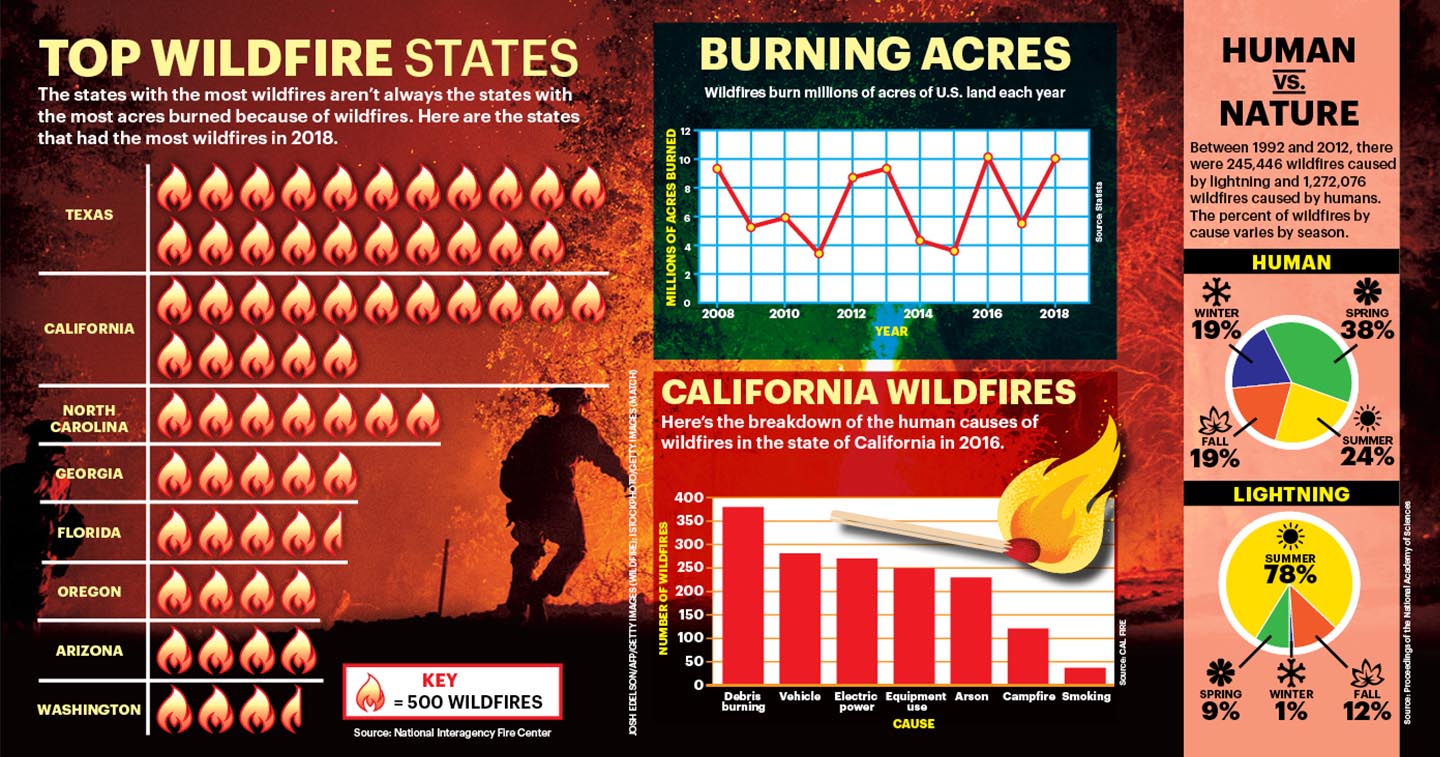 Answer the following questions using the information in the charts and graphs above.

About how many wildfires were there in North Carolina in 2018?

Which human cause accounted for about 250 California wildfires in 2016?

Which season has the most human-caused wildfires?

Between which two years was the greatest increase in the number of acres of land that were burned by wildfires?

About how many California wildfires in 2016 were caused by electric power and debris burning combined?

Which two states had about the same number of wildfires in 2018?

A. Arizona and Oregon

B. California and Texas

About how many more acres of land were burned by wildfires in 2018 than 2017?

Are more wildfires caused by lightning or by humans during the summer? By how much? Explain your answer.

Poll your class on which graph surprised them the most. Then create a bar graph showing the results on a separate sheet of paper.

Share this bonus article from MATH magazine with your fellow teachers!