Back to Teacher View
Student View

We’ll send you updates on digital features and tips here throughout the year. Check out Science World At Home for our favorite stories and tools to kick off your year.
Explore
Dismiss 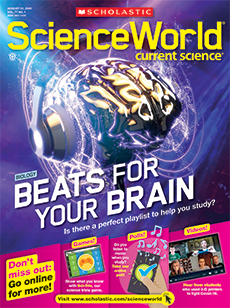 READY TO GO: In November, the companies Pfizer and BioNTech announced their vaccine is 95 percent effective against Covid-19.

Update: On May 10, 2021, the FDA authorized emergency use of the Pfizer-BioNTech Covid-19 vaccine for young people between the ages of 12 and 15. A clinical trial demonstrated the safety and efficacy of the treatment for this age group (see “Testing Vaccines,” Science World, March 15, 2021). None of the volunteers who received the two-dose vaccine became sick with Covid-19. After being vaccinated, researchers report that kids and teens experienced the same short-term side effects as adults. This includes mild soreness at the injection site and fever. The FDA authorized emergency use of the Pfizer-BioNTech vaccine for teens over the age of 16 in December 2020.

It’s been nearly a year since cases of Covid-19 were first reported and the novel coronavirus began to spread around the world. And though there’s still a long road ahead, an end to the pandemic may now be in sight. The United States has just authorized distribution of the first vaccine shown to protect people from the virus that causes Covid-19. The U.S. Food and Drug Administration granted the medication emergency use authorization, which will help speed up the delivery of the new medical treatment to the public during the current health emergency.

Vaccines not only protect the people who receive them from getting sick, but they also protect others through a phenomenon known as herd immunity. When most of a population can’t contract a disease, it helps prevent the spread of the illness to individuals who aren’t immune, or protected against the infection (see How Herd Immunity Works). Scientists estimate that once 70 percent of people become immune to the novel coronavirus, widespread transmission of the disease will stop.

Millions of doses of this newly authorized vaccine, created by the pharmaceutical company Pfizer and the German biotechnology company BioNTech, have already been manufactured. Now, Pfizer-BioNTech, government officials, and hospitals plan to immediately begin distributing the vaccine to people in high-risk groups. These include health-care workers and the elderly (particularly those in long-term care facilities). On December 2, the U.K. became the first country to authorize emergency distribution of the Pfizer-BioNTech vaccine. A week later, Canada granted official approval to the vaccine.

When most people in a population are immune to a disease, it indirectly protects those without immunity.

Whenever a new vaccine is being developed, it must go through three sets of clinical trials to test whether the medicine is safe and effective. During each of these trials, scientists give the vaccine to larger and larger groups of volunteers (see “The Race for a Vaccine,” Science World, October 28, 2020). According to Jason Varin, a professor at the University of Minnesota’s College of Pharmacy, the larger the group of volunteers, the more scientists are able to learn about the benefits and negative side effects that could be caused by an experimental drug.

The final stage of clinical trials before a drug is submitted for approval is called phase III. This stage includes thousands of participants—44,000 in the case of the Pfizer-BioNTech vaccine. Phase III trials can last for several years as scientists wait to see how well the vaccine works compared with other treatments, to learn how long immunity to the disease lasts, and to track any long-term side effects. “Overall, it’s not unusual for the whole vaccine development process to take up to 10 years to play out,” says Varin.

THE FIRST TEST: This syringe contains the first dose of vaccine given in the first phase of Pfizer-BioNTech’s vaccine trial on March 16, 2020, at the Kaiser Permanente Washington Health Research Institute in Seattle.

In comparison, the Pfizer-BioNTech vaccine development was speedy, but safety wasn’t sacrificed. Normally, scientists who are testing new vaccines spend a lot of time seeking funding for their research and finding volunteers for trials. This wasn’t the case with the Covid-19 vaccine. To help stop the spread of this deadly disease, scientists were given access to nearly unlimited resources, and tens of thousands of people volunteered to participate in the trials. That enabled scientists to create and test the vaccine in record time.

So far, the vaccine has shown no serious side effects. Adverse reactions are extremely rare for vaccines in general. According to the U.S. Department of Health and Human Services, if 1 million doses of an approved vaccine are administered, one to two people may have a severe allergic reaction, for example. Some trial volunteers for Pfizer-BioNTech reported coming down with mild side effects, like fever, tiredness, headaches, and soreness at the injection site, after receiving the vaccine. Findings also showed that two doses of the vaccine—given three weeks apart—were 95 percent effective in preventing illness caused by the novel coronavirus (see How the New Covid-19 Vaccine Works).

HOW THE NEW COVID-19 VACCINE WORKS

Thousands of adults and kids volunteered to test Pfizer-BioNTech’s new Covid-19 vaccine. This December, the U.S. Food and Drug Administration authorized the treatment for emergency use in adults. Here’s how the vaccine protects people from becoming ill with Covid-19.

Each particle of the SARS-CoV-2 virus, which causes Covid-19, is covered with distinctive proteins—large biological molecules—that look like spikes.

Scientists studied the virus’s genetic code—the set of instructions that allows the virus to function and reproduce. Researchers used a section of code to produce strands of messenger RNA, or mRNA, a molecule that carries directions to make these spike proteins.

Scientists packaged the mRNA inside tiny particles made up of fats.

When a person receives the vaccine, these particles are injected into their muscle tissue.

The particles with the mRNA enter the body’s muscle cells. Once the mRNA is inside the cells, the cells use the mRNA’s instructions as a template to build spike proteins and display them on their surfaces.

If a vaccinated person is exposed to the SARS-CoV-2 virus, their body is already primed to recognize the unique spike proteins. Their immune system will know how to make antibodies to detect and neutralize the virus. Their body will also be able to deploy T-cells that can recognize the virus and help destroy it.

Once a vaccine has been developed, it needs to be evaluated and approved by the FDA. During public health crises like the Covid-19 pandemic, companies like Pfizer can ask the U.S. government for emergency use authorization to get vital medical treatments to people sooner. Companies still have to prove their medicine is safe and effective by testing it on a large group of volunteers, but they don’t need to provide years and years of data to support their findings. And as Covid-19 cases continue to rise, the world can’t afford to wait years for a vaccine, says Varin. “With the rate at which people are getting infected, everyone would get sick before we had a vaccine. It would be catastrophic.”

Scientists won’t be stopping the phase III trials. “The emergency use authorization allows you to provide the vaccine to those who need it most while continuing to monitor the phase III trials,” says Mark Slifka, a microbiologist at Oregon Health & Science University. As scientists continue to monitor the volunteers and gather long-term data, new results may change their understanding of the vaccine’s safety and most common side effects, says Slifka. “But if there are any changes, they’ll probably be small,” he adds.

One hurdle when it comes to distributing the Pfizer-BioNTech vaccine is the fact that it needs to be stored at -70°C (-94°F)—colder than the average annual temperature in the Antarctic. Delivery companies like FedEx and UPS will carry doses of the vaccine in special boxes filled with super-cold dry ice—the solid form of carbon dioxide gas. Once the doses are transferred to a hospital or pharmacy, they can be kept in a fridge but must be used within five days.

Experts worry that this need for extreme cold will make the Pfizer-BioNTech vaccine difficult to transport around the world. Thankfully, other vaccines in development can be stored at higher temperatures. The company Moderna currently has a vaccine the FDA is reviewing for emergency use that can be shipped at -20°C (-4°F)—about as cold as a typical freezer—and kept in a refrigerator for up to 30 days. Several other companies also have vaccines in the works, which they plan to submit for emergency use authorization.

Right now, Pfizer-BioNTech says it has 6.4 million doses of its vaccine ready to ship and estimates that it’ll have 50 million ready by the end of the year. There are 328.2 million people in the U.S. alone, so most individuals will not be able to get the vaccine right away. And this is just the vaccine made for adults—a vaccine for children probably won’t be approved for a few more months. That’s why health officials stress that it’s important for everyone to continue to follow social distancing guidelines, wash their hands, and wear masks. But Slifka says he’s hopeful: “The vaccine is looking safe and it’s looking effective. Now is the time to start using it.”